“Sorceress” has long been a favorite film of mine, for reasons almost impossible to describe to anyone else. It’s almost unbelievably shitty in every measurable way, but boy, is it an entertaining ride if you’re in the right mood (pro tip: the “right mood” might involve a twelve pack of swill beer in this case).

This was legendary B-movie director Jack Hill’s last film from what I can tell, and wow, is it terrible (but awesome). Watching “Sorceress” makes it hard to believe that the same director that brought the world classics like “Foxy Brown,” “Coffy,” and “Switchblade Sisters” somehow spat out this abomination.

But in 1982, the hugely successful “Conan the Barbarian” movie was spawning countless cheap imitators left and right, so it’s not surprising that Jack Hill somehow got roped into service to make this legendary turd of a film.

The action gets started with an army of about six or seven guys in ridiculous-looking armor hunting down a pregnant woman revealed to be the wife of evil sorcerer “Traigon,” who is bent on sacrificing his firstborn to the malevolent god “Calgara.”

After Traigon catches up to his fugitive wife, he discovers that she’s had twins. Rather than doing the prudent thing by just killing both completely helpless infants, Traigon decides to interrogate his wife. He has one of his ridiculous looking henchmen try to torture the woman to find out which baby is the first born. No sooner does the torture begin than there’s a bolt of lightening, and “Krona” appears, sort of the wise old wizard type. He kicks all the evil baddies’ asses, and as Traigon lies dying, he tells everyone how he’s got more lives and will be back in a few years. Then he disappears in a failed special effect.

His wife is also dying, and entrusts Krona with the care of her infant daughters before dying. Krona magically bonds the baby girls as the “Two who are one” with his wizard spells, and also grants them powers at fighting skills and sorcery, before handing them off to some farmer couple, instructing them to raise the twins as boys to throw off Traigon when he shows up again. Then, Krona promptly disappears to wherever guys like Krona go to hang out when they’re not being badass wizard guys.

20 years fast forward by, and sure enough Traigon reappears and immediately begins telling his lackeys to find the “Two who are one.” A guy in a terrible ape costume scampers around while some “Princess” shows her titties, and the small army of dudes wearing ridiculous armor cheer together. This scene immediately transitions to the now-adult twins skinny dipping in a lake. This scene makes it very clear just how bad a plan it was to pass off the twins as boys was, because they’re played by real life twins and Playboy centerfolds Leigh and Lynette Harris, and there is no way anyone would ever think the two of them were males. Yet, we are to believe that somehow no one has been tipped off by their obvious Playmate attributes, because they wear matching “male” clothes. Despite being raised by a woman and having a sister neither of them seem to have ever compared their bodies to them, and noticed any similarities. OK…moving forward.

Their naked shenanigans are being secretly watched by “Pando,” possibly the ugliest and most fake looking Satyr in movie history. Seeing that the lusty manbeast has a “horn” dangling between his legs and assuming it’s some sort of weapon, the two “brothers” beat the shit out of the pathetic goat man. Pando beats a steady retreat and the twins return home to discover Traigon’s forces attacking their home. Their father and mother are both murdered by Traigon’s paltry army, while their sister is raped and then also killed, so the twins kill a bunch of the evil doers, although a handful escape to tell Traigon. The sister’s display an awkward fighting style at best, but they do glow blue at some point, so perhaps that gives them the edge they needed. Afterwards, Pando returns, this time with “Valdar” the Viking, who must be the worst looking movie Viking in history.

He has a habit of saying gems like, “By Yggdrasil, tis sorcery,” so we know this guy is legit.

Valdar totally believes the Playmates are male, and agrees to help them wreak vengeance upon Traigon, who he also hates. The Viking suggests that they seek out his bro Erlik who might also be up for some Traigon-bashing, and off they go to a nearby “city.”

The city is as sad looking as Pando and Valdar, resembling Mortville from “Desperate Living,” or maybe a really low rent renaissance fair. They find Valdar’s pal Erlik getting in bar fights and biting the ass of a scantily clad wench, basically acting like a slimy bastard.

After heading to a room, Valdar witnesses the twins undressing, and then tries to creepily explain to them the differences between men and women while they let their boobs get some screen time. In short order the twins end up captured, and one of them is revealed to be the first born, pleasing the evil team to no end. The extra twin is offered to a guy in a terrible ape suit for his amusement (shudder), but fortunately for the twins, their male buds show up and bust up the party.

Erik and one of the twins are quickly recaptured by a group of the ape men, and Erik is stripped naked and sentenced to the painful-looking “death by sliding down a greased pole as a ten foot spike is shoved up his ass.” Fortunately for our leading man, there’s a ridiculous plot development that identifies him as some sort of prince, and it’s understood that the sacrifice of the first born will be better if Erik and her get it on, so he’s spared the death by ass-kabob.

What follows is a grotesque scene where Erik and one of the twins (I can’t tell them apart, and it doesn’t matter) get it on, and the other twin who is off somewhere hanging out with Valdar, reacts as if she is the one getting nailed. So, an awkward and creepy orgasm by proxy.

The sacrifice is about to proceed when the orgasmic twin and Hagar the Horrible (“Valdar” – same difference) show up to ruin the party. Traigon waves his hand, and the ground gives way under them, and they fall into some sort of underground tomb. A bunch of corpses reanimate (as they do) and close in. So things are looking bad for all of the hero characters, when suddenly we hear the voice of ‘ol Krona commanding them to “Use the name Vitaan!” The twin does, and weird shit ensues.

Erik and the sacrificial twin suddenly shake off their drugged stupor, the zombies below give up on their prey and decide to storm Traigon’s temple instead. Then they decide to haul off and rape the temple women.

Valdar remarks on that development “It’s been a thousand years, you know?” Classy guy.

Anyway, at some point during all of this, two of the most badly-executed special effects “gods” I’ve ever seen appear.

One looks like a Hispanic woman’s head with half of her face rotting off, just floating way up in the air occasionally shooting fireballs at people. The other is even worse, looking like an extremely fake lion monster made of foam rubber. They do battle, and the evil floating head explodes.

Traigon disappears again, claiming he’ll return (probably for a sequel that never came to be for some unknown reason) and the heroes battle his remaining forces, until they’re all vanquished.

Then, the heroes all group laugh like the end of a bad sitcom, and that’s the end.

Seriously, find this film and watch it. It’s awesomely bad. Lots of bad special effects, gratuitous nudity, and an all around low production values. 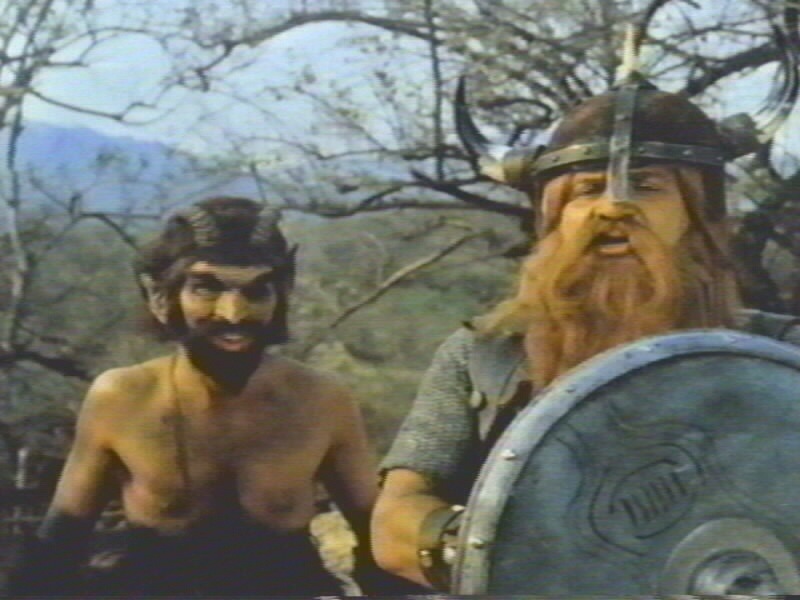 By Yggdrasil! Ye boys have vaginas! 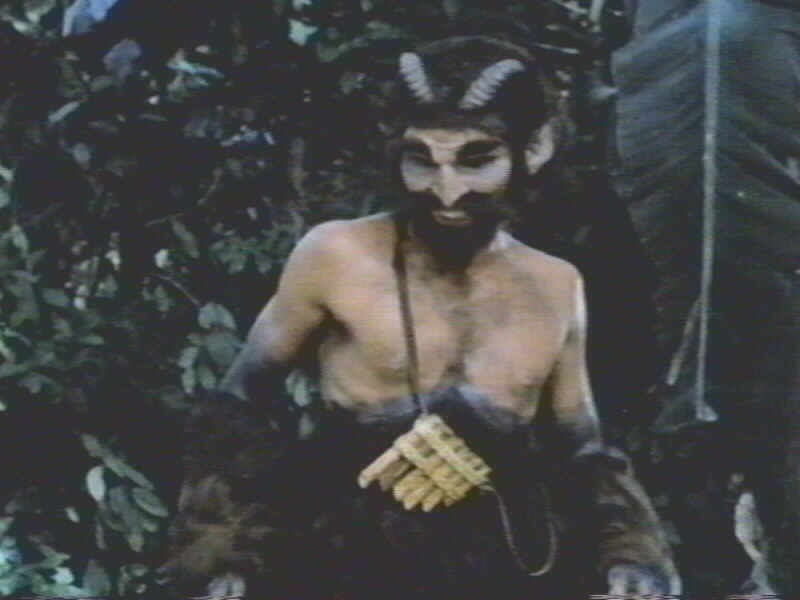 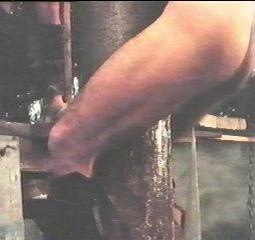 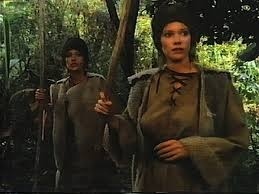 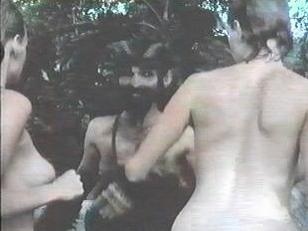