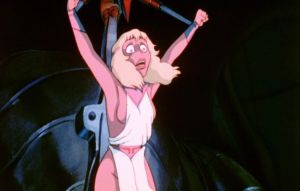 Angel About to Sing a Demon into Existence.

“Rock & Rule” is a 1983 animated feature created by the Canadian company Nelvana. Although it never got a proper theatrical release, and was mainly shown on Canadian television and early American cable channels, it has developed a large cult following in the decades since it came out. For a long time, it was available at comic conventions as a bootleg, and it didn’t get a decent authorized release until fairly recently when it was released on DVD and Blu-ray. Even those releases look like they may have been limited in scope. Also mucking up the film’s history is the fact that there are two versions of it floating around. The original Canadian version used a different voice actor to play Omar, the film’s male protagonist, and he gives the character a more abrasive and cocky feel than the replacement actor did. There’s also a slightly different ending where a character we think is dead is revealed to have survived. So what’s the deal with “Rock & Rule” anyway?It takes place in some blighted dystopian future where cats, dogs, and rats have mutated into humanoids. In the small city of Ohmtown, a small band plays to an empty club. The band members are the film’s protagonists – Omar, Angel, Dizzy and Stretch. There is a power struggle going on between Omar, who seems bent on being the band’s leader and singer, and Angel, who wants to be able to perform one of her songs.Decadent rock star “Mok” has been searching the planet for the right voice, which he needs to open a dimensional portal to summon a demon. Apparently his popularity has waned slightly, and he wants to show everyone he’s still top dog by bringing on the Apocalypse. Sounds sort of short sighted, as dead people can’t buy records or go to concerts, but Mok is more than slightly crazy. He has a ring that his Satanic computer designed that will light up when it senses the correct voice, and guess what? Angel’s voice is the one Mok needs.Mok, being the suave rock star that he is, invites Angel and the rest of the band to his palatial mansion conveniently located in Ohmtown. They go, but Mok is only interested in Angel, so he zonks out the other members of her band with hypnotic devices called “Edison Balls” and promptly kidnaps Angel. His mansion transforms into a high tech Zeppelin and flies off to Nuke York, where he plans to summon his demon at a concert to end all concerts.The rest of Angel’s band pursue them, and after the Nuke York concert fails because of a power failure, Mok heads back to Ohmtown which conveniently has a power plant that can create an endless amount of energy.At the concert, the demon is summoned, but Omar joins Angel in singing it back into the abyss, while one of Mok’s henchmen throws the demented rock star in after it.The film ends with Angel, Omar, and the rest of the band being hailed as the next big band.That’s the story in a nutshell. A lot happens, but not a lot happens, if you know what I mean. The story is a simple one, but “Rock & Rule” has a lot going for it. The story has just enough twists to keep things moving briskly, the animation is pretty good, and the dark environments all look pretty nice. Some of it reminds me of the Moebius comics from “Heavy Metal.”There’s also a definite dark tone to the whole film, with plenty of Satanic and drug references sprinkled throughout, and mild sexual content. It’s hard to believe that this was originally shown on Canadian television. It’s not Caligula by any means, but it’s still pretty edgy. The soundtrack for the film is pretty good too. Mok’s music was done by Iggy Pop and Lou Reed, while Omar and Angel’s material was recorded by Cheap Trick and Blondie. The music fits the film well, with the one exception of a Earth Wind and Fire song used in a scene taking place in a disco.The characters aren’t developed as deeply as maybe they could have been, but Mok in particular is adequately sinister, and Angel and the rest of her band mates are fun enough to watch. It’s a shame that “Rock & Rule” had such a troubled distribution and never found a larger audience, because it’s a uniquely strange animated film.The whole thing is currently uploaded on YouTube if you have a hard time tracking down the limited DVD release. Sadly, Nelvana Studios never followed up with anything as cool as “Rock & Rule”, instead finding greater success with “The Care Bears Movie” and other kiddie cartoons. For anyone interested in strange animated films with a decidedly dark and weird tone, this one is worth finding.If I gave out ratings, I’d give “Rock & Rule” 7 summoned demons out of 10.