I caught this film on Netflix the other night, based on a reference from a friend of mine. It’s a recent Irish horror film, although I never know how to classify movies like this. It’s about monsters that eat people, but the monsters are from space, does that make it more of a science fiction story or a horror tale?

I guess it doesn’t really matter, what matters is that monsters from space have crashed into the sea just off the shore of a remote Irish island. In short order a bunch of dead whales have washed up on shore, fisherman have caught something weird instead of lobster, and an odd couple of cops start to realize something very strange is happening.

Early on we’re introduced to the protagonist cops. Ciaran (Richard Coyle) is a barely functional alcoholic who is fortunate to have an easy gig on an island where nothing particularly cop-worthy ever seems to happen. He is begrudgingly partnered with Lisa (Ruth Bradley) who has signed up for extra duty to impress her superiors back at her job on the mainland. She’s as much of an ambitious workaholic as Ciaran is a drunk.

In typical “meet cute” fashion, they start off on the wrong foot with one another, but there is little doubt that they will end up together by the film’s end. We’re also introduced to several of the island’s more colorful characters, notably Paddy, a drunken fisherman, and the local marine ecologist Dr. Smith.

Weird things quickly begin to take place on the isle. Something seems to be attacking people, leaving only a severed head behind in one attack, and that’s just not a common occurrence. After some basic investigation, the responsible parties are discovered – “Grabbers”, monsters that are so named because they have enormously long tongues that they shoot out to suck the blood from their victims. Turns out that all these Lovecraftian horrors need to survive is human blood and lots of water. Fortunately for them, they landed near an island and a tropical storm is about to hit town.

It’s also soon discovered that the one thing these creatures can’t stand is the blood of drunk people. Alcohol is poisonous to them. That’s good for the humans living on the island, as it seems the local pastime is getting shitfaced every night.

After realizing that the Grabbers are about to be handed the perfect situation in which to eat everyone on the island, the film’s heroes decide to trick everyone in town into getting wasted at the local tavern, essentially hiding out, and rendering their blood into space monster poison.

And so it goes. The film itself is a simple one, and there aren’t any real surprises in store for anyone that’s seen a few formulaic monster-from-space flicks. In a movie like this, it’s not really the simple plot that makes or breaks it, and that’s a good thing, because “Grabbers” is a lot of fun to watch.

First, all of the acting is good, and the characters are likable. This is especially true with the main protagonists Ciaran and Lisa. Ruth Bradley is particularly interesting, and she owns the scenes where she is forced to get loaded for the first time ever to foil the anti-drunk space aliens.

The aliens themselves are well rendered, if not especially original. They’re realized through CGI, but the effects are well done and convincing, and the creature design reminds me of the types of tentacled horrors that H.P. Lovecraft was so fond of writing about. The island location itself is a good one, and adequately gives us the sense that the islanders are effectively cut off from any help from the outside world. “Grabbers” is played straight, but there is ample humor throughout the film, reminiscent of films like “Shaun of the Dead,” although this film tilts a little more towards horror than humor. In a way, I was reminded of formula monster films like “Lake Placid.” A good mix of characters and their chemistry makes films like these seem a lot “better” than they might be without that dynamic. The violence is pretty standard for a film like this, if a bit more restrained than one might expect. Several heads are bitten off, but none of it is extremely gory or graphic. I’ve seen about the same level of graphic violence on an episode of “Buffy the Vampire Slayer.”

There is appeal in watching the straight-laced Lisa get drunk in order to thwart the monsters, and in seeing the normally drunken Ciaran stay sober enough to save the day. “Grabbers” is a simple monster movie, but it has enough laughs and charismatic characters to make it an entertaining film to watch. It’s not frightening at all, but it’s fun enough.

I’d give “Grabbers” six shots of Irish whiskey out of ten. It’s worth checking out on a rainy night. 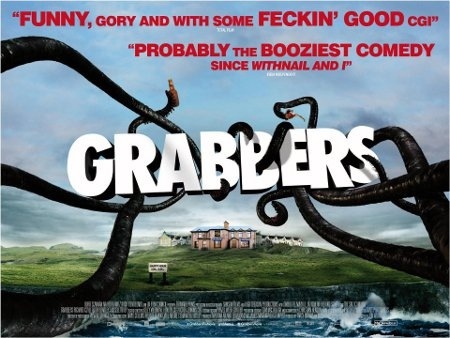 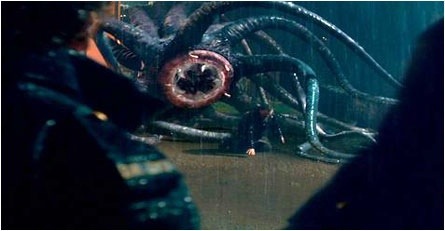 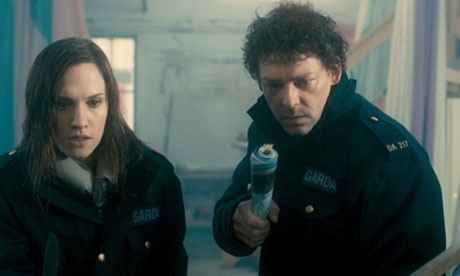