I caught this 70’s rarity on Netflix under the alternate title “Act of Vengeance,” about as generic a title an exploitation film could have. I had seen “Rape Squad” mentioned in reference books about grindhouse and exploitation movies, but had never run across it before. I wasn’t quite sure what to expect, but this film was much weirder than I was prepared for.

The plot is a fairly simple one. Independent young Linda (Jo Ann Harris) seems to have a good life. She owns a successful food truck, and has a studly casual boyfriend. Everything goes to Hell when she’s raped by a guy wearing a hockey mask that forces her to sing “Jingle Bells” while he assaults her.

When Linda goes to report the rape, she finds that the cops are dismissive and don’t take it seriously, basically claiming that there’s almost no chance they will solve the crime. There’s a whole lot of “You were probably asking for it” kind of dialogue, and Linda’s dickhead boyfriend also shares that opinion.

Worse still, the Jingle Bells rapist has been quite busy, and Linda meets a bunch of his other victims at the police station. Since they realize that the cops are not going to do much other than tell them that they should probably “get over” being raped by the Jingle Bells bastard, and move on with their lives, the women decide to form their own vigilante group to seek vengeance.

They enlist the help of a female karate expert to teach them how to beat the shit out of guys (mostly involving kicking them in the balls), and the newly formed Rape Squad is ready for action.

That’s the plot in a nutshell, and after punishing a series of abusive guys, including a nightclub owner with a reputation for cornering unwilling women at his sleazy 70’s make out pad, and a pimp that’s abusing one of his streetwalkers, the group finally has a nighttime showdown with Jingle Bells in a park.

A lot of the proceedings are formulaic, which is to be expected in a 1970’s exploitation/revenge flick, but the general tone of the movie is pretty yucky. Not because of the fact that rape is one of the central themes, but because of how the material is treated.

It took me awhile to figure out what was so wrong-feeling about this movie, and then I realized what it was. “Rape Squad” has a story with a strong feminist message (unsurprisingly it turns out it was written by a woman), but the material is presented in the same way that any standard exploitation drive in movie of the time would’ve been handled, with lots of gratuitous nudity and objectification going on. It was directed by a man, and any feminist message is buried under a ton of standard exploitation film making, aimed at a primarily male audience.

For instance, the scene where the victims of Jingle Bells form their squad takes place in a sauna, where they’re all chit chatting in the nude. There are a lot of scenes like that.

The film kind of reminds me of Jack Hill’s movies. “Rape Squad” looks a lot like “Switchblade Sisters,” but is not nearly as fun or stylish. Nothing is portrayed in a very realistic manner, and that does provide a slight cushion between the sexist handling of sensitive material.

Pretty much every male in the movie is either patronizing and dismissive, or a total potential rapist sleaze bag. It’s easy to cheer on the vigilante women as they best those guys. But the film suffers from that weird contrast. It wants to have a message, but it also wants to objectify these women in a way that’s not congruent with that message. I’m not offended by women being shown naked in exploitation or horror films, but there’s something creepy about having that nudity presented in a rape scene, and then having the actual rapes treated less seriously than is usual. We’re still meant to ogle the various naked female parts on display, and that’s a major contrast to the way an exploitation film like “Make Them Die Slowly” handled the ugliness of rape.

In any case, the whole film has that disjointed “What were they trying to do here?” feel, and it’s hard to take seriously. It would be like trying to make a family film out of “Hostel.” Some elements just don’t work when combined.

The film also suffers from a lot of the “stupid mistakes” that women always seem to make in these types of movies, like being captured or attacked because their shoe heel breaks, or going off alone when they know the enemy is about. Again, that works against a film that’s supposedly about empowering these women.

On the other hand, “Rape Squad” is certainly not the most offensive 70’s exploitation film I’ve ever watched, and it moves along at a brisk pace. There are enough fun scenes with the vigilantes kicking some 70’s scumbag ass, and I would probably recommend the movie to anyone that likes the revenge formula, and who isn’t REALLY uncomfortable with the subject matter. I won’t apologize for “Rape Squad,” but I won’t champion it either. It’s another to put in the “1970’s were a pretty twisted decade” file – entertaining on a trashy level, but definitely not the empowering story its author might have wanted it to be.

If I gave out ratings, I’d give this one 4 leering bastards out of 10. 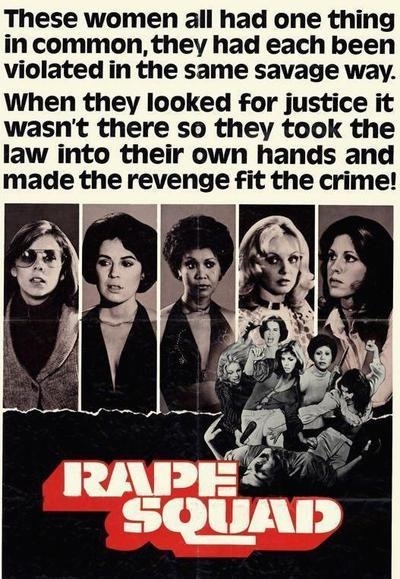 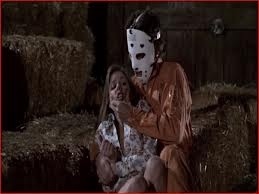