So you’ve decided to start a new band. Perhaps you’ve never been in one, and it’s your first go at it.  Maybe you’ve been playing in bands that were already established before you joined, and have decided to form one of your own. Unless you’re planning on calling on friends of yours to form your new supergroup, you will likely have to locate some people to fill out the lineup. So, how do you go about finding them? Yes, there’s that bass player that lives under the bridge and exposes himself to passing women, but he’s probably not the best choice even if he can rock a mean groove.

You’re probably going to have to get creative to find band members.  There are several strategies that can be used, like:

1. Networking Within Your Music Scene.

This is an option for any musician that’s already been kicking around their local scene for a few years. If you were the guitar player for beloved local band Death Hippie then you’ve probably made lots of friends and acquaintances among the local music community. Unless of course, you’re some locally famous asshole that has alienated everyone in your scene.

If that’s the case, perhaps moving away and starting over in Germany is your best bet. If not, networking locally may help find you some new bandmates. Chances are, other musicians have recently left the bands they were in and are looking for a new gig. Networking could quickly put you in touch with the people you need to get your band going.

This is probably one of the most common strategies for people looking for band members. It’s appealing because it’s a simple one. Rather than scrabbling around the local scene trying to meet the right musicians, you simply pay a few bucks and place an ad in whatever passes for the local music paper and wait. Now, the downside is that you never know who might respond to an ad, and you might miss out on some good players simply because they never saw you were looking for “A rock guitarist willing to wear clown makeup who sounds like a cross between George Lynch and Jerry Garcia.” If anyone does answer your ad, you’re dealing with a complete stranger, and you have almost as much chance of a serial killer showing up as the perfect match for your new project.

Makes sense right? Go where other musicians go, and the advantage is you might actually hear them play a little before approaching them. There’s nothing worse than having some person respond to an ad and having them end up being a weird creepo that’s casing the joint, or some well-meaning time waster that can hardly play.

But I’ve known several bands that found a member by hanging out at a guitar shop and listening to people come in and play. Anyone that’s sat around a Guitar Center on a Saturday knows this might not be a fun experience, as most people that seem inclined to test drive gear tend to do so loudly and often badly, but every once in a while, you’ll hear someone really good. This method also gives you a chance to see what people look like. Image might be important to you and your plan for the band, and some dude that’s 20 years older than the rest of you or who looks like Frankenstein’s Monster in drag might not work for your project. Or maybe that’s the perfect image. Who am I to judge?

Even if you fail to find the perfect new band mate at the music store, you’re already there, so you might as well…

4. Put an Ad Up On Bulletin Boards.

I’ve never been to a music shop that didn’t have some sort of bulletin board for people to put up notices looking for people to play with. I’ve joined a couple of bands by responding to ads on a music store bulletin board, and this might just be your ticket to finding the right bass player for your new Gothic Space Jazz Metal band.

The downside to this approach is the same as placing an ad in a music paper. You may have to field calls from people that will be bad matches for your band, or who might be a murderous psycho looking for the perfect head to complete his human jigsaw puzzle.

There’s also a supply-and-demand issue that the music store bulletin board brings into sharp focus. There are a LOT of guitar players and singers out there, fewer bass players, and a whole lot less drummers in most music scenes. I don’t know why this seems to be the case. I’m guessing that more people grow up with dreams of being a lead singer or guitar player, but whatever the reason, the music store bulletin board will make this imbalance clear.

You’ll see a hundred “Guitar player and singer looking for a bassist and drummer” flyers for every “drummer and bassist looking for a metal (or whatever) band” ad. Anytime you DO see a flyer for a drummer looking for a new band, it’s likely that all the little tabs with the persons phone number on it are already ripped off.

Contrast that to those flyers for people looking for a drummer. Most of them look unmolested and lonely by comparison. It’s worth a shot, but if you’re a guitar player or singer looking for a drummer or bassist to hook up with, you may be waiting for a long time for that call to come in.

On the other hand, if you’re a drummer or bass player, you’re in good shape. Sure, you may live in a beat up minivan down by the park, and you have to eat at the dumpster buffet to get by, but you’ll be in high demand for playing with people. Chances are you’re probably in ten bands already.

This is not as common since it involves a significant financial investment, but for the right kind of project it can work. Can’t find people to play the type of music you want to play? Or maybe you’re a huge asshole, but have a pile of cash to spend, and an ego that demands you call all the shots.

Just hire yourself a bunch of musicians to play the material you want them to! You can get the best players you can afford, and if they want to get paid they’ll check their egos at the door. If you’re lucky, your new band will catch on in popularity, and eventually you can network your way into having players that want to join and aren’t expecting a payday from you.

The downside is that, unless your music is truly amazing, people will eventually start to question why you had to pay to get people to play with you. If your ego is at a proper “David Lee Roth” level of inflation, these criticisms won’t matter, so maybe it’s a moot point.

6. Poach Them From Another Band.

This is a surprisingly common approach to getting new members. Go to see other bands play, and when you see someone that you want, just try to poach them from their band. I’ve had this strategy tried on me several times over the years, and seen it done many times. I guess it just depends on how comfortable you are with being completely cutthroat, and whether or not making enemies in the local music scene is important to you.

I also always figured that in most cases, any bandmate that left their previous band to join yours without a good reason, is probably mercenary enough to do the same to your band. Like most things in life, there are cooler ways of poaching a band mate than others. It’s hard to fault someone for extending the offer if that member has become a friend, and is already unhappy in the band they’re in. But walking up to someone you don’t know yet, right after they leave the stage, and asking them to jump ship for the awesome Clown Sex Metal band you’re forming might not come off very nicely.

It’s the difference between getting to know someone of the opposite sex, and then asking them out on a date, and yelling at a stranger across the street that you want to stick your cock up their ass. It might not be received as well as you hope. 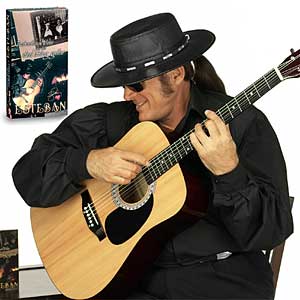 If this guy shows up to audition… Run!

But if this guy does, keep him no matter what you have to do.

If any of these strategies pan out, your newly minted band will undoubtably be able to move up the rock ladder in no time, and that drummer might even be able to trade in his minivan home for sweeter lodgings in the storage closet of your band’s practice room. Just be careful. That guy sometimes pisses himself when he’s too drunk, and the carpet in there already smells pretty horrible.