It’s about time I reviewed a Chuck Norris film. The whole idea for “Trailer Park Ninja” stems from the goofy white guy martial arts ninja craze that was happening in the early 80’s. I remember it as being a sleazy combination of lingering 70’s macho male culture embraced by burned out stoner kids who were discovering “Ninja” movies.

You could go to any flea market back then and buy cheap, and usually dangerously low quality “throwing stars” and nunchucks, and it seemed like every 14 year-old guy I knew had a few laying around. I knew a couple of different teenage boys that happened to live in the same trailer park, that were really into this ninja thing. Also Ozzy Osbourne and weed, although I’m not sure how all of that worked into their ninja lifestyle.

Anyway, “The Octagon” seemed to have been one of the more influential movies for that strange ninja stoner culture, as well as 80’s ninja movies in general. I hadn’t seen this Chuck Norris epic in decades, but recently found it on Netflix and decided to check it out.

Chuck is a retired Karate champ, and is hired by a wealthy woman that is having trouble with attacks by ninjas. Presumably, this was a common problem for the wealthy back then (if it wasn’t, it should have been). The plot is needlessly involved. I mean, it’s an early 80’s action film about ninjas, and there are tons of plot holes which a simpler plot would have made less obvious, but it manages to (mostly) move along at a decent pace.

In any case, there are flashbacks to Chuck Norris’s childhood (he always plays a character in his movies, but I can never think of him as anyone but Chuck Norris), where he’s shown training as a martial artist alongside his obviously evil half brother, and it’s revealed that the two become lifelong enemies fighting over a prized sword. None of this matters, it just explains why Chuck Norris somehow has an evil Asian half brother that’s training a paramilitary group of mercenaries and ninjas somewhere in Central America.

I know, makes complete sense right? The mercenaries training at this ninja camp cover most evil categories of bad guys that were common to the 1970’s, and the ninja camp is their training ground, because it somehow makes sense that being sneaky like a ninja, and being able to stick a throwing star in the back of someone’s head are valuable life skills for a villain to learn.

And that’s about all anyone needs to know. Essentially, the plot is an unlikely series of events designed to get an unwilling Chuck Norris to find the training camp and beat a bunch of ninja ass.

Along the way, we’re treated to some mild R-rated sideboob nudity, a few scenes where people are dispatched with ninja stars or swords, and a whole slew of ninja dudes that look like they were the template for the G.I. Joe Cobra Commander.

I don’t think I’m spoiling much to reveal that Chuck wins in the end.

So is “The Octagon” entertaining? It’s not completely boring, but it’s not as great as I remember. Another case of a film that could’ve been improved with more nudity and violence, as the absence of those things makes you actually have to pay attention to the plot, which is goofy as Hell.

“The Octagon” is cheesy and silly as any early 80’s action film that you are likely to find. The numerous scenes where we hear Chuck Norris’s thoughts in the form of narration are a good example. Rather than just have him speaking, someone decided to was a good idea to apply a weird sounding echo effect on his voice, and that corny attention to detail is evident in nearly every scene. “The Octagon” could easily have worked as parody if it had come later in the Ninja Movie cycle.

Yet through it all, Chuck Norris exudes a certain charm that’s hard to place. He has a strange soft spoken voice, and a scary scary mustache. He might be the hairiest blonde man I’ve ever seen, but the fucker is suave, no denying that. I can see why aspiring tough guys loved his films so much. I’m surprised that he hasn’t been embraced as an icon in butch gay circles. But I better be careful, Chuck Norris might track me down and thoroughly kick my ass for saying that.

It’s also interesting to watch this film, as well as many of the action films made in America during that era, because the martial arts scenes look so “tame” compared to the fight scenes most of us are accustomed to nowadays. They just don’t move as fast, and the punches don’t look like they hurt as much as something out of a Jackie Chan film. It’s doubtful that an action film of this style would fly today, though I’m sure a lot of flea market throwing stars got bought by aspiring “ninjas” back in the early 80’s as a result of this film.

“The Octagon” is fun and adequately entertaining, if not the classic it’s rumored to be. For someone wanting to watch a vintage Chuck Norris film, I’d suggest “Lone Wolf McQuade.” It’s a lot better. 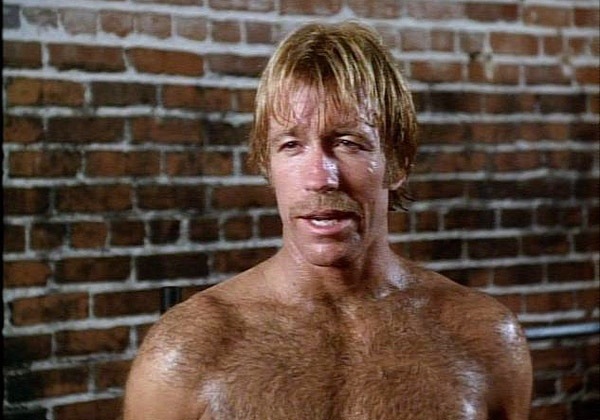 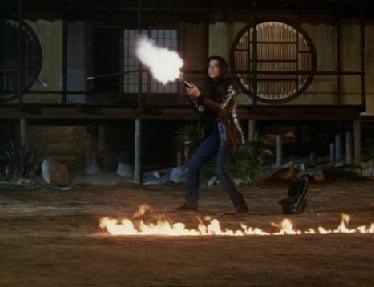