Pieces (1982)“Pieces” is one of the seedier slasher films from the heyday of the genre. It’s gained a cult following since its release, but also plenty of critics. Although the movie takes place in Boston, it was directed in Spain by Spanish director Juan Piquer Simon from a story written by Eurosleaze veteran Joe  D’Amato, and it shows. Nothing about this film indicates “Shot in the USA using English speaking actors.”Low budget slasher film veteran Christopher George has a leading role, and Linda Day plays the main female love interest, but most of the other actors and actresses have a distinctly early 80’s European feel to them. Even the locker rooms and other locations look like the Spanish locations they really were.The story, like most Slasher films, begins with a prologue – in this case, set in 1942. A young boy is caught putting a puzzle together, and his mom freaks completely out because it’s a photo of a naked woman. While she goes ballistic, the boy brutally murders and dismembers her with an ax. The cops that investigate are fooled into believing that a young boy wouldn’t be capable of such an act, so he isn’t a suspect in the crime.Fast forward to 1982 and someone is murdering and dismembering coeds at a University in Spain…er…”Boston”.Without going into the intricacies of the plot, basically the grown up version of the little boy from the film’s prologue is chopping up women to make his own human puzzle. That’s really the plot in a nutshell.So is “Pieces” a good film? No, of course not. It’s a terrible, trashy, and exploitative film. It even looks ugly and cheap, sort of a soft focused “shot on 16mm” look. The blood is too red, everything else is sort of washed out looking.But is “Pieces” a fun film? Yes, I think so. It’s really violent, but while the director wasn’t shy about laying on copious amounts of gore, none of the effects are particularly convincing. For some reason Euro horror films from the time period tended to be a little more vicious, and a lot more depraved, than their American equivalents. There’s also a lot of violence against women (usually naked or mostly naked) on display. I gave up making excuses for these films years ago. If seeing a nude woman menaced by a chainsaw-wielding guy, and then chopped in two makes you angry, then definitely steer clear of “Pieces.” There are beheadings, stabbings through the head, body parts sewn together, victims reduced to a pile of parts, or cut clean in two…and more. None of it is done very well, but the filmmakers really went for the gold in this respect.Yet nothing in this film is depicted in a way that I can take seriously. Some of the dialogue is surreal in its awkwardness. At one point, a coed waxes on about how there’s nothing better in the whole world than smoking grass and fucking on a waterbed, and the acting throughout this film is cringeworthy.It’s also hard to take scenes set in 1942 seriously when they include close-ups of a push button phone being used, and even the naked woman on the 1942-era puzzle looks straight out of 1978.There’s plenty of gore, none of it realistic, a not insubstantial amount of naked female flesh, a ridiculous plot, but lots of slasher movies from the time period contained those elements. Fortunately for anyone watching “Pieces,” the middle section of the story doesn’t bog down and get boring (something all too common within many films of the genre.)I will add that while almost all of the violence is directed at women in this movie, there is a ludicrous shock ending that remains one of my favorite of all time. After the big reveal of the killer’s identity, the corpse of a woman made from the sewn together parts of many bodies suddenly springs into action (her arm anyway) and grabs the young hero guy’s crotch, crushing his balls like grapes, with a big squirt of blood spraying out. Thee is no reason for this weird zombie-like action in the logic of the film. It’s just there “because.” If nothing else, I figure that this scene displays an equal willingness to show horrible stuff happening to males. Almost as if to say “Yes, we hate women, but we hate Men too!”So if brutality and bad filmmaking aren’t a deal killer, “Pieces” will definitely entertain a fan of early slashers, if for no other reason because the crude attempts to shock us are unintentionally funny in their execution.If I gave out stars, I’d give “Pieces” 5 out of 10. It’s really a three star film, but goes at the proceedings with a tasteless gusto that earns it two more. 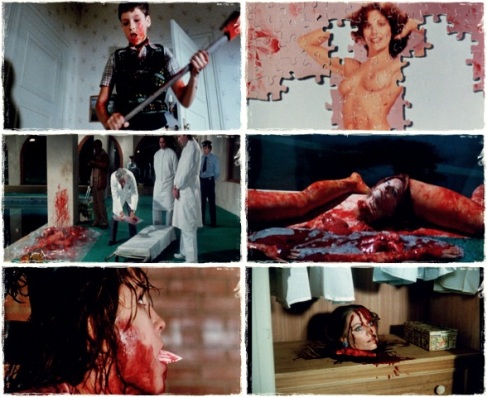